I am just glad it's all behind me now. It started with a discoloured canine, which the STAFF spotted when we got back from holiday in August. The vets here gave me a general anaesthetic, took some x-rays, but didn't see anything wrong with it.
But, they did send the x-ray to a specialist veterinary dentist, and he said it was non-vital pulp damage and that my tooth would die slowly and it would have to come out or I'd need root canal treatment.
Not good!
We went yesterday to have it done. But we had to drive all the way to Surrey to get to see Norman Johnstone of dentalVets. I hate saying it, but he's a really nice guy! Apparently, our normal vets have me down as a problem case, but Norman was such an easy going chap, I let him look at my teeth and all, no growling. Now, there was someone with a good barnside manner! I wasn't pleased when he explained the procedure in detail to the STAFF, but I focussed on the bit where he said I'd be much better after having it done.
The STAFF callously left me there and went somewhere. Probably without a care in the world. I have already marked them down for punishment for that offense. Don't worry. Where was I? Oh, yes. THEY left me, and then I had to wait ages, because a big bull mastiff was having his op first. Apparently it was a case of poking him with tranquilizers from a distance, do the surgery as quick as possible and then get rid of him before he comes around again. And our vets think that I am a problem case? Maybe I should make introductions between them and Bully Mastiff?
Once I went under it was all a bit of a blur. I hear that 4mm thin wires drilled out the pulp and special American slow drills were needed to get around an obstruction. But I was not listening to all that. Made me feel queasy...
The upshot is, my canine is shorter, with a nice solid filling, some rubber filling in the pulp canal and much less pain.
Now, if you excuse me, I didn't get much food yesterday, so I have a busy day of eating ahead of me!
Oh, and the vet has some nice pictures of my tooth, which he will send to the STAFF. I'll post them here once I have them.
But this pup has no dodgy pulp any more and is ready to rumble! 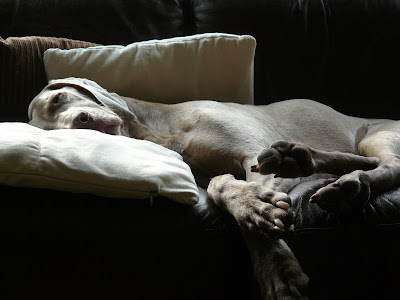 After a few hours of rest...
Posted by Otto the Weimaraner at 09:10

I am glad you are better. I was very worried! Can't wait to see those tooth photos... ughh... the things you do for a bright smile!

I will put the tooth pictures up very soon. BUT I am so busy at the moment. I feel all young and full of energy. I feel good. Yeah!

Yours, full of zest,

Otto the Weimaraner
United Kingdom
I am a Weimaraner, looking after two members of STAFF. I used to have a different home, but I left when it became clear that people were not looking after me properly.